Here at mobilegames.com, we’re all extremely excited about the summer release of one of the most anticipated augmented reality (AR) mobile games ever, The Witcher: Monster Hunter. Because we couldn’t get mobile AR games off our mind, we decided to delve into the other amazing AR games that are playable on mobile today.

We’ll start with the one mobile VR game that needs no introduction, Pokémon Go. We’ve written a lot about Pokémon Go here at Mobile Games – which is unsurprising considering the global phenomena that it caused. Receiving myriad headlines in the New York Times, The Guardian, BBC, and more, for months it seemed like this was the only game people could talk about. It resulted in arrests, deaths, festivals, health-kicks, plenty of breaking and entering, people walking out in front of traffic, oh and a whole load of fun!

While Pokémon Go was not the first mobile AR game, it was one of the first to really capture the world’s attention as players searched towns and cities the world over in the eternal quest to catch ‘em all. It’s been described as a “parenting holy grail”, a “cultural moment”, and a “mania”. It remains an intensely popular game and it’s safe to say that plenty of the lesser-known titles that follow wouldn’t exist without it.

Harry Potter: Wizards Unite, wisely, follows the hugely popular geolocation-based AR formula of Pokémon Go. After magic appears in the muggle world, players must establish themselves as official members of the wizarding world with a custom Ministry ID. After activating a Portkey Portmanteau, they are transported to the iconic locations of the books and films where they can interact with JK Rowling’s beloved familiar faces. After choosing to specialize as an Auror, Magizoologist, or Professor, players team up with friends to brew potions, complete challenges, and cast spells as the augmented reality experience infuses real world locations with witchcraft and wizardry.

When looking at their mobile maps, they will find the locations of Inns, Greenhouses, Fortresses, and Traces that will trigger exciting encounters with fantastic beasts. While the game isn’t as original as Pokémon, if you’re more Weasley than Weezing, then it’s a satisfying RPG experience complete with an underlying mystery to solve – “What caused the Calamity?”

We highly recommend checking out this 10/10 trailer… “Expecto patronum!!”

While Pokémon GO was hailed for its ability to do what the Wii failed to achieve, i.e. getting gamers moving, there is an augmented reality game that did it with even more success a full four years before people were using their phones to catch Squirtles under bypasses. And that game is Zombies, Run! The concept is fairly simple, to encourage people to exercise more, instead of just listening to pumping house music, they hear announcements of impending undead doom closing in on them. Furthermore, they automatically collect equipment and upgrades as they go which can be used to reinforce a virtual base.

As many people have realized in recent years, when a task is gamified – it becomes much easier to persevere with. It also becomes much easier to go jogging when you’re under the impression that the gruesome gnashing jaws of the undead are nipping at your heels. The Mobile Games team has just set this frightfully unfit author the challenge of trying to get healthy with Zombies, Run! Stay tuned to see whether I succeed gloriously or fail horror-ibly.

Jurassic World Alive is another game that builds upon the tried and tested Pokémon Go and Wizards Unite formula. Only this time, your mission is all about fantastic dinosaurs, and where to find them. That’s not to say it’s a bad game, far from it. After all if something isn’t broke then it shouldn’t need fixing.

In Jurassic World Alive, dinosaurs have finally succeeded in their dastardly mission to take over the world. That leaves you, the player, with the mission to take back control – exploring the real world, collecting dinosaur DNA, creating hybrids in the lab, and battling teams of dinosaurs in real-time PvP arenas.

Games based on movies and TV shows don’t tend to get a good rap, but the Jurassic World franchise has spawned some genuinely great mobile games such as the excellent Jurassic World: The Game which follows the now-closed hit 2012 construction and management simulator Jurassic World: Park Builder. We hope that Jurassic World Alive manages to maintain some longevity, for while it is not the most original concept, it’s still a great augmented reality game.

Fans of the never-ending Angry Birds series had a real treat upon the launch of Angry Birds AR: Isle of Pigs. It took their 2D game and took it out into the real world. Unlike some of the geolocation-based games above, Angry Birds AR requires a flat surface on which it digitally projects a 3D landscape. From there, all the physics-based catapulting action you’ve come to love over the years comes to life.

Other AR games have tried to create a similar projected tabletop experience such as Knightfall AR – a game whose ambitions cannot be faulted though whose execution was found lacking. Because, by comparison, Angry Birds is a simple concept (shoot birds at pigs) the developers over at Resolution Games managed to pull it off. Players don’t need to be completely static; they can plan their attacks by moving around their gameboard and choosing smarter angles – adding a new element of dynamism to the fan favourite mobile game.

Warning: Like most games on this list, if people don’t know what you’re doing they will think you’ve lost your mind. Something that the developers hilariously acknowledge in the trailer.

If you enjoyed this article, be sure to bookmark us and follow us on our new Instagram page. And stay tuned to discover how Alex succeeds in his Zombies, Run! Challenge. 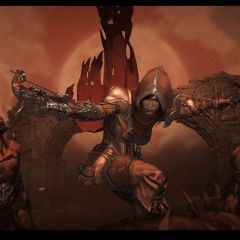