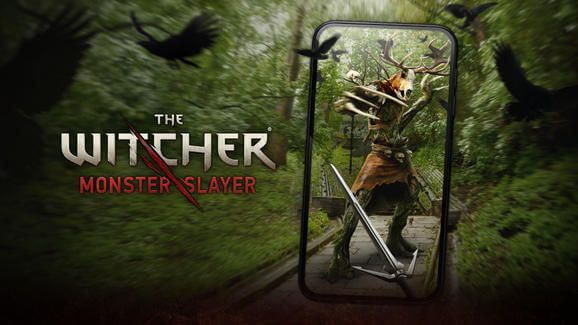 As a huge Witcher fan who has recently reviewed Harry Potter: Wizards Unite, I have spent much of the last year eagerly awaiting my chance to play The Witcher: Monster Slayer. It just so happened that when that opportunity struck, so did a dose of Covid-19. As you can imagine, being stuck inside your flat with a mobile AR game that encourages the exploration of the outdoors was not ideal. Until recently, developers had catered for the many players stuck in self-isolation by increasing the prevalence of localized encounters in augmented reality mobile games. With those adjustments now reversed, I spent the following ten days chopping up the Nekkers and Pixies that dared to enter the proximity of my bedroom.

In spite of these restrictions and a slew of negative reviews, I thoroughly enjoyed taking down these minor foes. Combat in The Witcher: Monster Slayer is primarily sword based; players must opt between quick attacks, heavy attacks, blocks, and parries. These are supplemented with the use of the Witcher’s famous Signs (magical attacks) and bombs.

Just as in the original series, different monsters have different vulnerabilities. Each battle requires the player to equip the best oils, blades, signs, and bombs for the enemies they face.

Having initiated a monster encounter, players can either choose to battle with AR off – in which case they are thrown directly into combat with a generic background – or play with AR switched on – in which case they must go through a rather clunky footprint-tracking introduction. On my iPhone 6S, this tracking mode malfunctioned more times than it functioned placing a nonsensical trail of footprints about half a meter from the floor. This was frustrating and disappointing; as a result, I largely battled with AR switched off. Though on the occasions where I played with it on, it was an exciting novelty to see an Alghoul in my bathroom (a sight normally restricted to early mornings and hangovers).

Many of the negative reviews of The Witcher: Monster Slayer are based around its unwieldy combat. However, I found the combat to be far more engaging and tense than the equivalent encounters in Harry Potter: Wizards Unite. Signs are the equivalent of Wizards Unite’s spells, but the addition of slashing and slicing with your blade in between added more dynamism and tension to the battles. That said, as with many AR games, these interactions did grow tiresome and repetitive after a while. It soon became clear that no matter how skilled I became in battle, it would require a lot of grinding or liberal use of the in-game shop if I was ever to slay greater foes.

After my isolation ended, I was able to get out and about and explore the not-so-wonderful world of The Witcher: Monster Slayer. I was eager to see what the game had to offer played in its intended explorative setting. After all that wait, I found myself disappointed. I completed the first few real quests (which had been cruelly tempting me with their proximity to my balcony) but found them lacking in any depth of character or variety of activity. The first of which was the now-notorious horse’s head quest – an addition which undoubtedly differentiates Spokko’s AR game from Niantic’s playful AR titles.

And yet, the following series of quests – which follow the format of “explore this area > explore this smaller area > battle a foe” were repetitive, mundane, and uninspired. The dialogue is not terrible, but it fails to come close to the intelligent, witty, and powerful storytelling that Witcher fans love.

The Witcher 3 provided me with one of my most heart-wrenching gaming moments: Having accidentally released a demonic spirit from its tree prison, I found the troubled but loveable Bloody Baron hanging from the tree of his Crow’s Perch fort. Could The Witcher: Monster Slayer ever hope to come close to achieving this level of compelling narrative? I highly doubt it. And frankly, I find it hard to believe that there are many players who would be willing to grind enough to find out.

As in Niantic’s playful AR games, in-game purchases in Spokko’s Witcher AR game are nigh-on vital to progress in any meaningful sense. In fully developed titles like Pokémon Go and Harry Potter: Wizards Unite, however, these purchase requirements are more justifiable. Harry Potter: Wizards Unite is a fully fleshed out game complete with stunning animations, a map that makes your local neighbourhood feel magical, beloved characters aplenty, minigames that break up the grinding monotony, and plenty of thoughtful little touches that are bound to delight fans of the series. By comparison, The Witcher: Monster Slayer feels rather empty, devoid of life, imagination, and joy. Almost like a beast that the sardonic Geralt would be paid generously to slay.

I can’t help but wonder if Spokko have stabbed themselves in the foot with a silver blade. The idea behind The Witcher: Monster Slayer is a brilliant one. There are certainly elements to celebrate: the soundtrack is fantastic, combat has the potential to be great with a few updates, and the hideous monsters of the Witcher series are a great way to bring AR games to a more mature audience. And yet, for what I can only assume are financial motivations, they’ve released a repetitive title lacking in depth, direction, and Andrzej Sapkowski’s iconic charm.

Had Spokko instead made it easier to progress without endless grinding or in-game purchases, they could have built a loyal fanbase early on and then supplemented the core gameplay with new features to keep players engaged. By building a dedicated fanbase with meaningful level progression and diversity of activities, they could have established a long-term revenue stream for themselves and a game that fans loved. Instead, it appears that they expect fans to play-and-pay a buggy half-finished game; a knock-off Pokémon Go wearing the skin of a necrophage.

While Witcher fans can be just as zealous as Pokémon fans and Harry Potter fans, their taste in media is likely to make them a little more savvy to the tricks of the trade. Just as Geralt has been made cynical and suspicious of the world around him, it’s safe to say that the fans that relate to him are likely to be a little more world-wise too. Dobby the House Elf, Geralt of Rivia is not.

Isolation or no isolation, The Witcher: Monster Slayer was a disappointment. Not because it’s a terrible game; it’s not. But because it could have been exceptional and, you guessed it, it’s not. To resurrect The Witcher: Monster Slayer, Spokko need to make significant changes – starting with the monetization and grinding philosophy and then by attempting to replicate the fleshed out, lived-in world achieved by the main Witcher games, novels, and show.

As it stands today, unless you’re willing to toss quite a few coins to the Witcher, The Witcher: Monster Slayer is not worth your time.