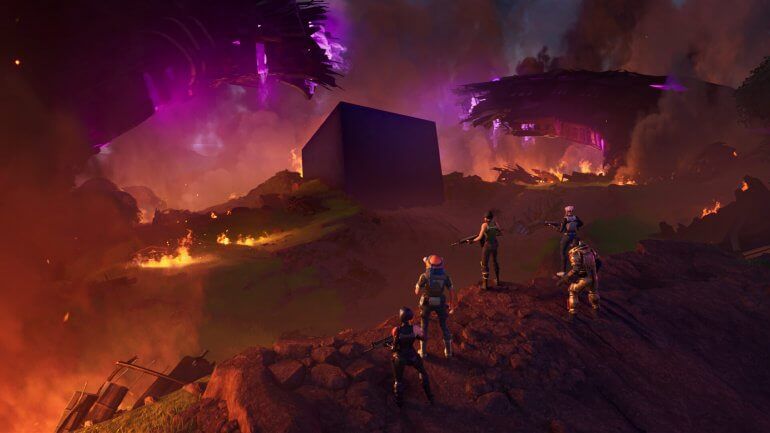 You thought Aliens were a big threat? Wait until see the Cubes!

In the newest Fortnite season, Epic Games have introduced us to a new threat to the island. Cubes!

Having powered the now crashed Mothership from the Alien vs. IO war, the cubes are now corrupting the surrounding area of the crash site. Players need to come together to face the threat and utilize all their wits and new weapons to gain an advantage.

As if the cubes themselves weren’t scary enough, they are also spreading portals to a dark and monster-filled reality, called “the Sideways“. A world with low gravity and no possibility to build.

The Sideways also bleeds into our world, affecting a Point of Interest each match. These POIs are also called Sideways Zones.

Scattered around the crashed mothership are so called Shadow Stones. By consuming one, the player temporarily turns into a shadow-like apparition in which he’s able to dash around obscured.

By entering the Anomalies, defeating those pesky Cube Monsters and opening up Sideways chests, players can earn cool new Sideways weapons as well as Cube Monster Parts, a new crafting ingredient to upgrade those weapons even further.

Using the new Sideways Rifle or Sideways Minigun, you are also able to deal bonus damage, by revving them to their superpowered state. Take that, Cube Monsters!

Fighting against the Cubes will require effort and players need to come together. Players can donate the Bars they earn in order to built Turret Stations and in the future they can also decide which weapons to develop, which ones to unvault and more.

Punch That Card and Party Hard

People on the island need your assistance! Each one of them got a Punch Card full of various missions for you to pursue. Over the coming weeks, new residents will ask your assistance in discovering the island even further.

And because we all know a party is best celebrated together, the Party Quests will grant rewards to everyone in your party. So round up your squad and earn those precious Bars!