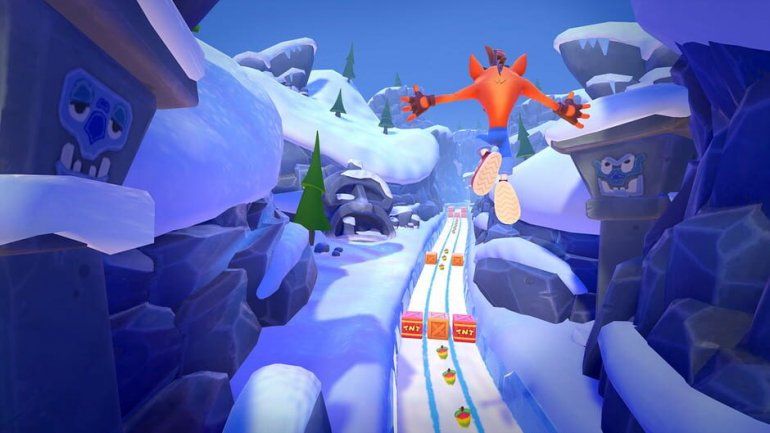 Whether you’re into “infinite runner” games with no end or whether you prefer your mobile running games a little more finite, the mobile runner genre has plenty to offer. We whacked on our running shoes and did a marathon of our own to find you the best of the best running games for Android and iOS. May the endless entertainment commence.

While other games featured in this list, such as Temple Run and Subway Surfers, hold the prizes for the first viral mobile endless runner games, we felt the first spot here belonged to the true founding father of the genre, Crash Bandicoot. As gamers above a certain age (and younger gamers with a penchant for retro games) will know, the Crash Bandicoot console games had sporadic levels wherein Crash had to keep moving or face being squashed by a boulder or other peril. Now that same nostalgia-laden gameplay is available in mobile form through Crash Bandicoot: On the Run.

Just keep running back to us Crash, you’ll always hold a place in our hearts. Overall, Crash Bandicoot: On the Run is a well-built, easy-to-play game featuring base-building, survival runs, costume changes, the plucky Coco Bandicoot, and all the familiar Aku Aku masks, TNT boxes, and satisfying sound effects of the original titles.

If you haven’t played Subway Surfers yet, we have only one question for you…why on earth not? Addictive, colourful, and featuring surprisingly catchy jingles, Subway Surfers is here to stay. Your mission is to run the tracks collecting coins while not only dodging trains and obstacles but escaping those pesky guards. As well as various “World Tours”, the game has seen significant visual and gameplay updates since its initial launch in 2012.

The train tracks will take you through all sorts of entertaining urban locations. And to stop things getting repetitive, players are able to complete daily and weekly challenges, as well as pick up fun power-ups such as coin-attracting magnets. Heck, the game is so popular it even spawned an animated Subway Surfers series for teens and kids.

We could never publish an article on the best mobile runner games without mentioning Temple Run – the game that started off the mobile craze. Temple Run (and its sequels) are now such iconic games in the genre that they were featured in two of our recent editorials: The Best Mobile Games to Play With One-Hand and The Most Viral Mobile Games of the Decade.

This is all despite the fact that it stands on a rather dated post-colonial concept of looting exotic treasures from indigenous temples. But for those of us who grew up in the Indiana Jones era, it’s a slightly uncomfortable concept that we just can’t seem to get enough of. It’s no wonder that for years, every kid in school was playing Temple Run. When it comes to mobile runner games, it’s as classic as they come.

Alto’s Odyssey is another endless runner style game that we’ve written about previously thanks to its offline functionality. It certainly deserves more than one mention though because this stunning and award-winning mobile game is truly a marvel. Unlike the other frantic swipe-fests of most endless runners, Alto’s Odyssey (and Alto’s Adventure) is all about keeping it chill.

Players explore stunning 2D worldscapes while a beautifully composed soundtrack creates an understated sense of mystery and enchantment. Alto’s Odyssey has been described as a labour of love, and even the briefest of game sessions makes it clear why. This game is a marvel. And before you say it, yes, we know the protagonist is on a sandboard…so technically this is an endless sandboarder game.

We get it, there are a lot of endless runners on the market. As well as the big names listed in this article, players could opt for Sonic Dash or Super Mario Run wherein they can play as remastered versions of gaming’s most iconic characters. While those games are well made, it could be argued that they offer no major differences in gameplay to other endless runner titles.

And so, instead of those legendary characters, we present to you Crossy Road – wherein your epic “endless hopper” mission is comprised of crossing roads as a cartoony blockish chicken. The game is much like Frogger but instead involves a variety of animals and a whole bunch of traffic. The appeal of Crossy Road is an incredibly hard sell using words alone so instead we suggest you check out the video below for a visual summary of the hilarity, death, and bird-based destruction.

How do you improve on the endless runner genre? Well, as has been evidenced time and time and time again, the solution is the same no matter what the genre…ADD ZOMBIES. Into the Dead 2 is the follow-up to the hit 2012 mobile game Into the Dead, and the sequel is back with bloody zombified vengeance.

Players run in first-person amongst the undead brain-eating hoards; they must work their way through, dodging and blasting all those who stand in their way. With a variety of weaponry to choose from but not much ammo, restraint and strategy are just as important as reflexes in this tense reimagining of the infinite runner concept.

The app store is like a box of chocolates, you never know what you’re going to get. Case in point, this official Forrest Gump endless runner mobile game.

In gameplay style, Run Forrest Run varies little from other endless runner titles: Dodge traffic > Collect items > Don’t die. And yet it’s all based in the world of the iconic Forrest Gump. So, what does that mean for actual gameplay? Well, it means instead of collecting coins, you’re collecting Bubba Gump shrimp. Instead of running subways, you’re running US highways, football stadiums and the erm… jungles of mid-war Vietnam.

We also don’t remember any scenes from the movie where Mr Gump is paragliding over cars so we guess the title, while official, isn’t canon. Then again, looking back at the movie, there’s a good argument to say that perhaps Forrest Gump was the first ever endless runner…

Sadly, while the running games are endless, this article is not. We hope you enjoyed our suggestions and be sure to send us your recommendations. For a completely different kind of mobile running game, stay tuned for an upcoming article where we’ve tested out one of our writers on the undead exercise app “Zombies, Run!”