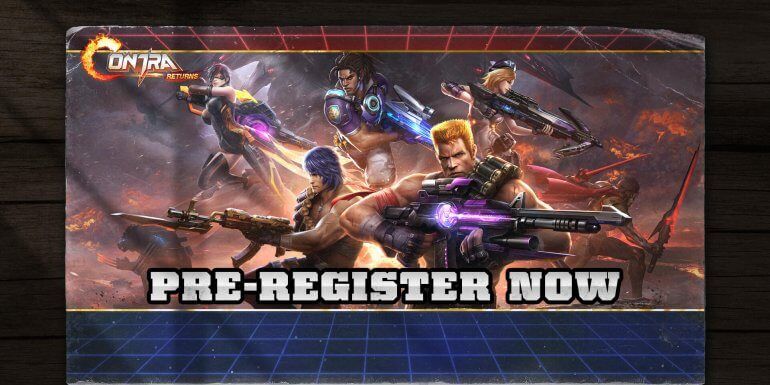 Konami’s Contra Returns pre-registrations are now live. There is only one word to describe how the epic trailer has left us feeling: pumped. In the live-action trailer, we see two of the leading beefcakes from the Contra series Bill Rizer and Lance Bean pumping iron, flipping tires, locking and loading and just generally looking badass. Towards the end of the video, these characters morph back into the beloved arcade-style artwork that has kept fans coming back to the series since 1987. Yep, 1987!

While they’ve stayed true to the nostalgic art-style on the small screen, that doesn’t mean that the mobile title will be lacking innovation. The upcoming title boasts enhanced graphics, gameplay upgrades, new characters and customization, 200 new levels as well as new game modes such as “One Life Mode”, “1vs1 Mode” and “3vs3 Mode”.

It’s a collaboration between original Contra publishers Konami and Tencent – who also published the similarly named Contra: Return exclusively for Chinese audiences in 2017. However, in spite of the confusingly similar names and shared publisher, the new game is said to be distinct from the 2017 title.

It’s a joy to know that Konami are still in charge of Contra Returns. The exclusively mobile game looks just as action-packed as the originals with fast-paced side-scrolling run-and-gun action. The title will be released in North America on July 26th on both iOS and Android; though it is available for pre-registration already.

Not long ago we published a chronological breakdown of some of the most classic arcade games that you can now play on your mobile. While it’s not a reboot, we’re left feeling slightly ashamed that we didn’t give Contra at least a passing mention. What other classic arcade games would you like to see relaunched on mobile?